“Tata’s hero… is still someone you want on your side when the odds are not favorable. Fans of Lee Child and Brad Thor will also enjoy [Jake] Mahegan’s adventures.”
Booklist
“Tata combines distinctive characters and unconventional threats to thrilling effect… terrific.”
Publishers Weekly (Starred Review) 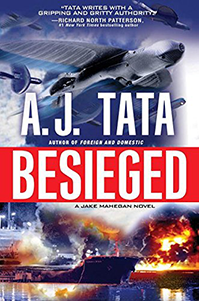 It starts with the unthinkable. A school under siege. A shooter in the classroom. A nightmare scenario that has become all too common in today’s United States. But this time, former Delta Captain Jake Mahegan is there when it happens.

Checking in on the schoolteacher daughter of a colleague, Mahegan finds himself face to face with a merciless gunman rigged as a suicide bomber. Without warning, the school is attacked from the outside as well—and all hell breaks loose. The teacher shoots the gunman, Mahegan is knocked unconscious, and a twelve-year-old autistic girl named Misha is kidnapped.

When the smoke clears, Mahegan is left with a long list of unanswered questions—and a deeply personal mission to rescue Misha. Racing against the clock, his search will take him from the tech-fueled think-tanks of a North Carolina factory to the top-secret nerve centers of embedded Iranian agents. It’s all part of a bigger, darker conspiracy that’s taking domestic terrorism to a whole new level. And it’s up to Mahegan to stop what could be the most devastating attack in U.S. history…

BUY BESIEGED AT ANY OF THESE RETAILERS