“Fans of books set in the world of special ops will surely enjoy this one. Tata, a retired brigadier general in the U.S. Army, is getting better and better with each new novel.”

“The high-octane action scenes make this a must-read for military thriller fans.” 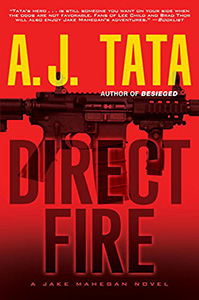 Packed with high-powered action and stunning authenticity, the novels of Brigadier General A.J. Tata have won widespread acclaim from the bestselling masters of suspense. In Direct Fire, he brings the war on terror to America—with his hero, Jake Mahegan, caught in the crossfire. . . .

A powerful banker, gunned down in cold blood. A military family, senselessly slaughtered as they sleep. A four-star general, hacked and framed by virtual assassins. Another key general, kidnapped from his farm near Fort Bragg. Atrocities like these are all too common in places like Iraq and Afghanistan. But this is the United States of America . . .

When Jake Mahegan receives a distress call from General Savage in North Carolina, he rushes to the commander’s home—and walks right into an ambush. When the smoke clears, Mahegan is alive but the implications of the attack are as absolute as death: The terrorists are here . . . and no one is safe. Joining forces with Savage’s combat JAG officer, Alexandra Russell, Mahegan follows the trail to a killer who goes by the name “Jackknife,” a Syrian refugee-turned-terrorist who vows to avenge the bombing of a Syrian wedding—by killing as many Americans as possible.

But time is running out for Mahegan. Terrorist cells are gathering in the Blue Ridge Mountains. Hackers are emptying the nation’s banks of millions of dollars. And their final act of vengeance will bring the whole world to its knees. For Mahegan, it’s time to kill. Now.

Support Our Troops this Christmas by sending a copy of Direct Fire to:

Order Direct Fire AT ANY OF THESE RETAILERS